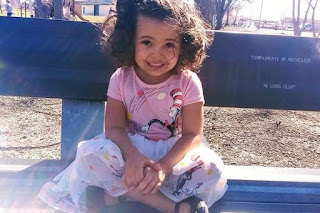 Efforts are being made to deal with the devastating effect the suspected murder of Jessica McCormack, Noel, had on her three small children.

The body of a McCormack, 25, a former Carthage resident, was discovered by a bicyclist on a hilly area off Highway 59 between Noel and Lanagan.July 29.

An Amber Alert was issued for the children, who were found safe in Des Moines, Iowa, where the father of one of them, Mahamud Mahamed, 37, Noel, abandoned them with a woman he had worked with at Tyson Foods in Noel.

The U. S. Attorney's Office has filed kidnapping charges against Mahamed, who is considered to be a person of interest in McCormack's death.

The family of Miguel Casillas, the father of Siah, 4, the oldest child, has established a GoFundMe page for items he will need once she is placed in her father's custody. At this writing, $190 has been raised.

The message on the page reads:

Recently Jessica McCormack was found alongside hwy 59. She left behind three small children, one of which, Siah Casillas, is my brother's biological daughter and he will be getting custody of her as soon as he can.

With that being said, this was absolutely unexpected.

Samantha and Miguel, my siblings, just bought a home and are getting on their feet. After hearing of the news about Jessica, we quickly knew that meant we got Siah.

Miguel and Sam have gotten her as much as they can get for her. So far they have a bed and clothing for fall and winter.

Siah is in need of 4t to 5t and up clothing. Size 10 up in shoes. Hand me down toys would be perfect. If possible grocery items as well. Non perishable as they have a tiny fridge.

Miguel Casillas filed a missing persons report on his daughter after if he had not heard from Jessica McCormack for some time, he told KOAM. After he learned that she and her siblings had been abandoned by Mahamed, Casillas began working to bring his daughter home.

From the KOAM report:

Casillas says "I want my child back, I want Siah back, I named her Siah, and Jessica named her Dean, and you know, Casillas, and I was proud of her since day one, and I just want her back."
Posted by Randy at 7:31 AM