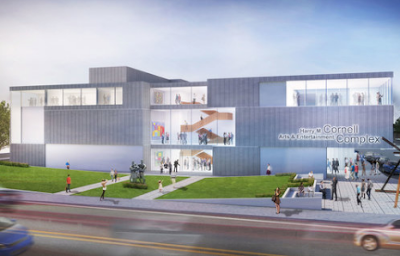 Connect2Culture (C2C) and Spiva Center for the Arts (Spiva) are pleased to announce that their month-long crowdfunding effort for The Harry M. Cornell Arts & Entertainment Complex (The Cornell Complex) far exceeded expectations.

The crowdfunding effort, held June 3–July 3, 2019, began with a $5,000 match from an anonymous donor – making the initial goal for this specific campaign $10,000 (i.e. $5,000 from the match, plus $5,000 in other contributions). All crowdfunding contributions were accepted through “Cause Momentum,” a crowdfunding platform powered by the Community Foundation of the Ozarks.

Due to the generosity of this community, the initial $5,000 was raised before deadline and the anonymous donor was inspired to match all donations, surpassing the initial $5,000 match, through the deadline (i.e. overall, the anonymous donor matched, dollar-for-dollar, for all donations to the month-long effort). By July 3, 2019, a grand total of $20,710 had been raised through the month-long crowdfunding effort.

The Cornell Complex Launch Party, hosted by C2C and Spiva on Monday, June 3, 2019, at the site location, was the official kickoff of this specific crowdfunding effort.

The event attracted over 175 attendees, bringing together city and state officials, donors, arts and cultural organizations, and citizens in support of The Cornell Complex. It was there that C2C and Spiva announced they had exceeded the $14 million amount needed to fulfill the Memorandum of Understanding with the City of Joplin and move forward with the project. Cash received, at that time, was reported totaling $5,132,783. Pledges from 192 individuals, businesses, foundations, and groups totaled $14,658,216. Efforts to continue positive momentum and reach the ultimate fundraising goal of $16 million for The Cornell Complex sparked the creation of this month-long crowdfunding effort.


C2C and Spiva would like to thank all generous donors who contributed to this crowdfunding project. Money raised during the month-long crowdfunding effort will contribute to the $16 million ultimately needed for the The Cornell Complex. To date, including the crowdfunding effort contributions, a total of $14,756,070 has been pledged to the project by 234 individuals, businesses, foundations, and groups.

When completed, The Cornell Complex will advance the revitalization of downtown Joplin and provide a new home for area arts in a state-of-the-art facility.

Those interested in Joplin’s future home for the arts can see renderings, details, and donate at www.cornellcomplex.org/.

I still want to know what will happen to Memorial Hall and where they think they're going to park.
HUGE waste of resources.

Who cares? No one uses it now.

Again, who cares? No one uses it.

No one uses it, but we should.

It's called Memorial Hall because it was built as a memorial to soldiers from Joplin.
THAT'S why it should matter.

Oh, so the city should keep a reasonably decent sized building up that no one uses because it is a memorial? Why not incorporate a memorial into something that the community uses? Or not. Because if anyone cared about said memorial you would see people going there to view it. But they don't. They don't view the memorial and they don't use the hall. Has anyone here actually been there to view the memorial?

Is there a memorial there?

We don't need an Art complex

We don't need or you don't want? You see, just because you don't see the need or have the want doesn't mean that you speak for we.

Just because a tax increase was voted down doesn't mean people are against what it would have paid for.

It would be interesting to see a vote on what people want if it does not require a tax increase. Personally I couldn't care any less one way or the other.