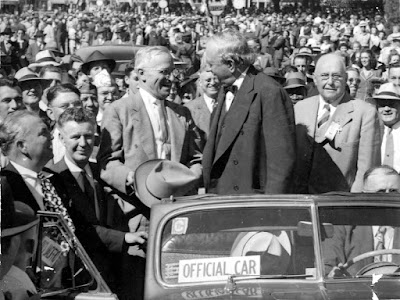 This column ran this week in the Lamar Democrat to commemorate the 75th anniversary of Senator Harry S Truman's return to the city where he was born, Lamar, Missouri, to offer the speech that served as the first speech in President Franklin D. Roosevelt's campaign for a fourth term.

The information comes from research I have done for my upcoming book, The Buck Starts Here: Harry S Truman and the City of Lamar.

It would have been an ideal spot to see the biggest political event to ever hit Lamar, but it had been years since Mattie had seen much of anything.

The date was August 31, 1944, decades before laser surgery, and by the time a woman lived 92 years, it was only natural her vision would be fading.

Mattie’s hearing was as sharp as ever, however, and from her vantage point in an open car directly beside the makeshift platform on the west side of the Barton County Courthouse, she could hear every word.

Mattie had always been interested in politics, so she jumped at the opportunity to ride across the state at a time when gasoline was being rationed for the war effort.

It wasn’t the first time Mattie had been in Lamar. She and her late husband lived there for a brief time shortly after their marriage.

She was not alone in making the trip to a small community that had never played host to this kind of event. Representatives of every major radio network and newspaper were also in attendance.

FDR made it clear he would not be campaigning while the nation was at war. The president’s health was also deteriorating, something that was obvious to those in the nation’s capital.

The speech in Lamar was likely to be the nation’s introduction to the man who would be the next president, well before Roosevelt’s fourth term ended.

Mattie was sitting a few feet from history.

She was not the only one who had an ideal vantage point to hear Truman.

Those who served on the committee arranging for the Truman visit were close to the platform.


A stocky man in his early 70s, with once jet black hair that now had a prominent streak of gray, Arthur Aull, editor of the Lamar Democrat, was poised to record the event in the pages of his newspaper. Until Truman’s nomination, Aull had been the best-known person from Lamar.

The two men who were responsible for issuing the invitation to Truman, Mayor Guy Ross and Chamber of Commerce President Raymond River, were there.


They knew how much bringing Truman to Lamar would mean to the community and did not hesitate to extend the invitation, even though they were Republicans.

Henry Columbus Chancellor, known as H. C., owner of the Travelers Hotel, had arranged for a banquet for Truman and other dignitaries earlier in the evening.

For Lamar, Truman’s return was more than just a political event.

The speakers and the festival atmosphere, complete with food stands circling the square, were a welcome break for a community marked by recent tragedy.

Two weeks earlier, three men held up a filling station and were confronted by Barton County Sheriff Roy Patterson, who was with his son Sammie. Somehow the men got the drop on Patterson and murdered him and his son.

It had been the duty of Chamber President Raymond River, who was coroner and owned the funeral home, to deal with the grisly discovery of their bodies and conduct the inquest.

It had only been a few days since the death of Donald Quillin, Lamar’s first war casualty.

Parents and spouses feared hearing from the War Department that their sons and husbands had been killed or wounded.

H. C. Chancellor was one of those who received a message from the War Department a few days earlier. His son, Richard, who had been cited for bravery a few months earlier, was missing in action.

It was into this atmosphere that Harry S Truman arrived to offer a battered community a welcome diversion.

Truman devoted most of his speech to a ringing endorsement of Roosevelt and why it was important to keep FDR’s steady hand at the helm while the nation was at war.

More than 10,000 people crowded onto the Lamar Square to hear Truman speak.

It was the first time most of them had ever seen the man who eight months later would become President of the United States and bring an end to the war in Europe and the release of Richard Chancellor from the POW camp where he had been held for nine months.

Mattie was also pleased with Truman’s speech, telling a reporter, “I think it would have been worth coming from California to hear. There isn’t a finer man living than Harry Truman.”

In less than eight months, Mattie would be living in the White House.

(Phoro courtesy of the Harry S Truman Library and Museum)
Posted by Randy at 10:01 AM

So much for the way our politicians and president operates and has concern for his nation and people. Best way to explain it is "our nation is plagued by Drano politicians" who make sure they are taken care of first, companies next, banks next, overseas governments(think Russia) next and finally someone else other than its citizens.

What are you babbling about, you tinfoil hat wearing left handed puppet?