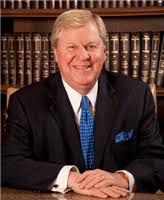 A disciplinary panel found Wampler violated the Rules of Professional Conduct involving communications with a client and keeping the client's money separate from his personal funds. The court opinion backed that finding.

The Springfield News-Leader reports two clients said Wampler initially refused to return their advances when they decided not to use his services any longer and refused to provide them with an accounting of the work he did no their cases.

That's because, as Wampler allegedly told the disciplinary hearing panel, he did not keep track of the hours he spent working on particular cases and "never has for 53 years."


The Supreme Court opinion cited "aggravating and mitigating" circumstances as its reason for placing Wampler on probation rather than suspended his license.

According to the decision, if for any reason Wampler's probation is revoked, he will not be allowed to apply for reinstatement for three years.

Wampler is an attorney of record on a number of prominent current cases. Among those he is representing are Dimitriy Andreychenko, who is charged with making a terroristic threat after walking through a Springfield Wal-Mart Neighborhood Center armed with a tactical rifle and wearing body armor and Joplin doctor Jeremy Goins on statutory rape and statutory sodomy charges.

Among the clients he has represented in the past:

Yes and I had fully intended to put that in the post.

That's why I thought I did. When I went back to check, I overlooked it. You have saved my sanity.