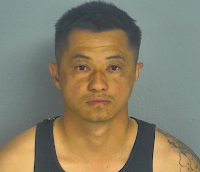 A Sarcoxie man who pleaded guilty in federal prison Monday had a stockpile of weapons, none purchased through licensed dealers and more than 5,000 rounds of ammunition when Newton County Sheriff's deputies and agents from Alcohol, Tobacco and Firearms executed a search warrant at his home Aprll 23, according to a plea agreement filed Tuesday in U. S. District Court for the Western District of Missouri.

Federal authorities were alerted to the illegal activities of Leng Lee, when Homeland Security intercepted a package from China addressed to Lee that contained selector switches designed to convert semi-automatic weapons into fully automatic machine guns.

In the plea document, the U. S. Attorney agreed not to seek more than 10 years in prison for Lee.

Lee's crimes are detailed in the plea agreement:

On April 23, 2019, law enforcement officers from Homeland Security Investigations (HSI), the Bureau of Alcohol, Tobacco, Firearms, and Explosives (ATF), the United States Postal Inspection Service (USPIS), and the Newton County, Missouri, Sheriff’s Department participated in the controlled delivery of an international mail package from China addressed to Leng Lee (LEE) at his residence located at 21657 Amos Lane, Sarcoxie, Newton County, Missouri 64862, a location within the Western District of Missouri.

The parcel contained seven parts (selector switches) that are used to convert a Glock semi-automatic pistol to fire in full-automatic mode.

Prior to the delivery of the selector switches, law enforcement intercepted the package upon its entry into the United States from China. Customs and Border Patrol (CBP) agents inspected the contents and determined it contained devices that were designed and intended to convert a Glock, semi-automatic firearm, into a fully-automatic machine gun style firearm.

Law enforcement became aware that LEE had ordered the devices over the internet from a manufacturer in China and that LEE was a convicted felon who was prohibited from possessing firearms and was not licensed to possess a machine gun.

On April 23, 2019, while conducting surveillance of the mailbox for 21657 Amos Lane, Sarcoxie, Missouri, agents observed LEE open and gain access to the mailbox, removing the mail package containing selector switches. LEE then drove his vehicle back to his residence.

Officers then proceeded to LEE’s residence. While driving toward the residence, officers observed the blue truck that LEE drove to his mailbox, was now parked in front of his residence.

As they approached, officers observed LEE walk into his residence. Newton County Sheriff’s Department SRT team made entry into the residence and made contact with LEE. Entry onto LEE’s property and into his residence was executed as a result of a federal search warrant that had been previously obtained.

LEE also admitted to placing the order for the seven selector switches and stated that he had 10-15 past deliveries of the same items, and that he was able to convert and successfully fire a Glock 19 pistol as a fully automatic machine gun.

LEE also claimed ownership of the methamphetamine and marijuana located inside his residence.

Special Agent (SA) Ken Killian with HSI contacted LEE on the front porch of his residence and informed him that there was a federal search warrant for his residence. LEE was escorted to the front passenger seat of the agent’s vehicle. LEE was advised of his Miranda Warnings using ICE Form 73-025. LEE stated he understood his rights, agreed to waive his rights, and speak with the agents.

ATF SA Brian Fox and SA Killian conducted an interview with LEE regarding the delivered package and other items that were found during the search of his residence.

LEE confessed that all of the firearms, selector switches that converted handguns into machine guns, the ammunition, as well as controlled substances found within his residence belonged to him. LEE also confessed that he knew he was prohibited from possessing a firearm or machine gun due to his status as a convicted felon.

A criminal history records check returned numerous previous felony convictions. In January of 2003, LEE was convicted for felony vandalism in California. In March of 2005, LEE was convicted of two counts of burglary, and single counts of felon in possession of firearm and grand theft, all felonies, and was sentenced to ten years in prison.

The firearms were also examined, and it was concluded that they were not manufactured in the state of Missouri, and that their presence in Missouri indicated that they traveled in and/or affected interstate commerce.

The Glock conversion devices were not registered with the National Firearms Registration and Transfer Record.

Finally, officers also seized over 5,000 rounds of ammunition, as well as various quantities of controlled substances that were confirmed by LEE to be methamphetamine and marijuana. All of the aforementioned acts occurring within the Western District of Missouri.

No date has been scheduled for Lee's sentencing.
Posted by Randy at 4:05 AM

Nice for ATF to confirm that these black market items work. Just makes life so much better now for the police the next time they stop someone. Got to love the internet


What's this world coming too?

HUNTINGTON, WV—Explaining that such suggestive armor was inappropriate for an educational environment, Huntington High School officials reportedly reminded female students Tuesday that their bulletproof vests must cover their midriffs. “We’ve been seeing some students wearing revealing bulletproof vests, so I just wanted to remind all you ladies that your kevlar must cover all your vital organs,” said Vice Principal James Nelson on the morning announcements, forewarning students that if they lift their arms up and any part of their stomach is exposed, then they would be sent to the nurse’s office and forced to borrow one of the school’s own ballistic vests, which are large and unsightly. “This is about respecting your classmates as well as respecting yourself. It’s distracting, not to mention inappropriate, to use your bulletproof vest to present yourself in a sexual manner during the school day. You can wear whatever type of tactical gear you want when you’re at home or at the mall, but when you’re here, it must be a longer, more modest item of personal armor.” https://local.theonion.com/school-administration-reminds-female-students-bulletpro-1837617262

This is scary stuff. Some of probably stood in line next to this guy in Walmart, took his order for food, simple day to day life events.
Glad nobody made him angry.