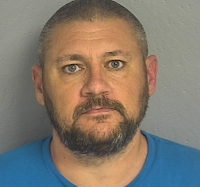 McKinney's trial had been scheduled to start Tuesday.

The official news release from the U. S. Attorney for the Western District of Missouri is printed below, followed by information posted earlier in the Turner Report.

Gary McKinney, 43, of Joplin, pleaded guilty before U.S. Magistrate Judge David P. Rush to the charge contained in an Oct. 24, 2018, federal indictment. McKinney was an officer with the Joplin Police Department for about seven years until May 20, 2006, after which he worked for a short time as a police officer in Webb City, Mo., and Duquesne, Mo.

The investigation began on Sept. 17, 2018, when a federal agent received a CyberTip from the National Center for Missing and Exploited Children. Facebook reported that a user had uploaded a video file of the sexual assault of a 4-year-old victim. Law enforcement officers contacted the Facebook user, who at that time was conversing with McKinney using the KIK messaging application.

Under the terms of today’s plea agreement, McKinney is subject to a mandatory minimum sentence of five years in federal prison without parole, up to a sentence of 20 years in federal prison without parole. The maximum statutory sentence is prescribed by Congress and is provided here for informational purposes, as the sentencing of the defendant will be determined by the court based on the advisory sentencing guidelines and other statutory factors. A sentencing hearing will be scheduled after the completion of a presentence investigation by the United States Probation Office.

This case is being prosecuted by Assistant U.S. Attorney Ami Harshad Miller. It was investigated by Immigration and Customs Enforcement's (ICE) Homeland Security Investigations (HSI), the Southwest Missouri Cyber Crimes Task Force, and the Joplin, Mo., Police Department.
From the Turner Report

The probable cause affidavit detailed McKinney and Helsel's alleged crimes: Helsel admitted to investigating officers that he had sent videos of himself with a four-year-old girl to others, including McKinney.

When law enforcement arrived at Helsel's home, he was talking to McKinney, who was going by the name of "Jim Beam" on the KIK application, the affidavit said.

Helsel said McKinney sent him a $30 money gram asking for photos of the four-year-old's feet. He also asked for shoes and socks that had been worn by the girl, but he did not want anything that had been laundered.

In exchange for that, McKinney allegedly offered Helsel an opportunity for a sexual encounter with an adult woman. When McKinney and the woman arrived at Helsel's home, the woman declined to have sex with him, the affidavit said.

Helsel gave law enforcement officers permission to assume his KIK identity and began "engaging in chats with Jim Beam." An attempt to arrange a meeting with McKinney that evening was unsuccessful.

A forensic examination of Helsel's phone showed numerous conversations between Helfel and McKinney, according to the affidavit. On October 2, Helsel sent McKinney several files, with two including child pornography.

One included an approximately five-year-old girl engaged in a sex act with a boy, who appeared to be about nine years old.


During the chat, the two talked about setting up or finding groups with young children live streaming sexual acts. McKinney talked about having "a few women with little girls." (The other man) asked if they would "live show" and McKinney replied , "Yeah they (have intercourse with) their kids."McKinney and other man exchanged child pornography images, including photos of a six-year-old, a seven-year-old an "infant or toddler" whose genital area was being graphically displayed by an adult.


The search of the phone uncovered other exchanges of child pornography and discussion about children engaged in sexual activity, according to the probable cause affidavit.

FBI investigators interviewed the woman McKinney allegedly tried to set up with Helsel and were told McKinney liked her to have sex with men, including an act that involved her feet and then give him the details.
Posted by Randy at 3:16 PM