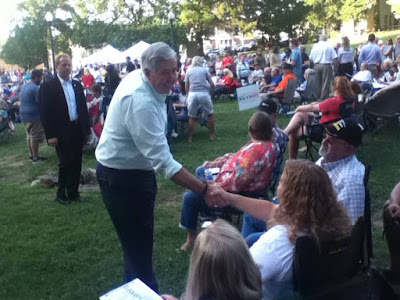 The park was not filled with faceless bureaucrats from the FBI or our other intelligence agencies waiting to do their best to keep America from being great again.

It was the introduction of the phrase "deep state" and the accompanying fears of faithful Donald Trump followers that he is the subject of a witch hunt that found its way into some of the politicking.

Republican candidates for U. S. Senate attending the annual Watermelon Feed sprinkled those references into their speeches and let everyone know that each of them was more pro-Trump than the ones who had spoken earlier. 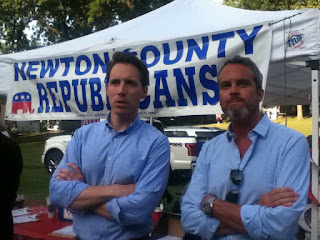 The candidates also revealed that they were pro-choice and that information did not set off any fireworks. More on that later.

Back to our president.

Attorney General Josh Hawley, who was anointed by Trump himself during a speech before the Veterans of Foreign Wars Convention in Kansas City last week, made sure everyone knew Trump endorsed him for U. S. Senate.

"It's good to have President Trump's support," he told one of the largest crowds in years to attend the watermelon feed. He would have said it again and again, but the rules limited each speaker to three minutes.

As it was, he just barely had enough time to work in his support of the Second Amendment and the right to life and then darted off the stage before the rest of his primary opponents spoke and left Newton County so that he and his wife could celebrate their anniversary.

Hawley was there for the first speaker, Austin Peterson, whose primary claim to fame was a stint as a producer for Judge Andrew Napolitano's show on the Fox Business Network, noting a poll, though he did not note which poll, had him beating Claire McCaskill in the general election by double digits, something Hawley could not claim.

Why, not only could Peterson beat McCaskill, but he would make sure to do it decisively. "Pow, right in the kisser," he said, placing himself firmly to the far right of the Me Too movement.

Though, Hawley thankfully was able to hear a man promising to nail McCaskill right in her kisser, he missed out on Courtland Sykes promoting his work with former National Security Director Michael Flynn.

"There is a witch hunt after that man," Sykes said, failing to mention that Flynn pleaded guilty.

Sykes used his three minutes to rail against the "deep state" that is conspiring to destroy this country. Apparently, he feels there are Americans colluding with Americans.

Thankfully, for those who prefer their Republican politics the old fashioned way when the enemies were the Democrats and not the people who are protecting us, there was plenty of Democrat bashing with Claire McCaskill and State Auditor Nicole Galloway serving as the primary targets. 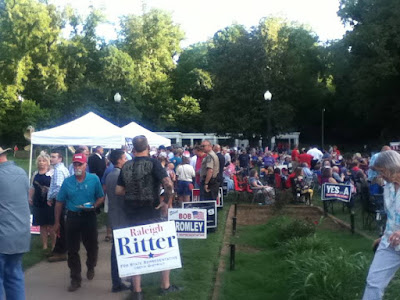 Parson showed a skill for meeting with people that his predecessor, Eric Greitens, did not have. While Hawley stood with arms crossed waiting for people to come to him, Parson went into the crowd, right arm extended, greeting old friends and making new ones.

It was a Newton County Republican's ideal scenario when Billy Long auctioned off a painting of Ronald Reagan and the top bidder was Sen. Ron Richard, R-Joplin.

Parson, who was not encumbered by the three-minute limit since he is not on the ballot, told of his recent meeting with President Trump.

"I was totally surprised how familiar he was with the state of Missouri. He wanted to know can we win in the U. S. Senate. Can we do that? I assured the president and vice president of the United States that we could win that election 'if you come back to Missouri and help us.' "

Parson said the country is doing well with Trump at the helm and would be doing even better if one obstacle could be removed- Claire McCaskill. Parson said he had promised to say one good thing about McCaskill.

"I wish her the best second place finish you can have in November."

Parson noted that McCaskill had worked hand-in-hand with former President Barack Obama, his tone dripping with derision as he mentioned Obama's name.

"She stood with him every step of the way."

The governor ripped into McCaskill for not revealing how she would vote on Trump's Supreme Court nominee Brett Kavanaugh.

The speakers were so anti-McCaskill and spoke of her so negatively, it was almost if they were on a witch hunt and McCaskill was the witch.

The most surprising revelation from the watermelon feed was the pro-choice attitude of the candidates.

Of course, that was on Proposition A.

The candidates felt every person had a right to choose not be a member of a union, but to benefit from whatever the unions get for workers through collective bargaining.
Posted by Randy at 4:20 PM

The good news is that in twenty three short years these people will be outnumbered by people who are now minorities and we can all be done with them. Then we can take away their Social Security and Medicare and tax the living hell out of them.The really good news is that their stance on abortion will make that day come even sooner.

You sound angry, Randy. You should relax. Say, I'm getting kind of sleepy. Maybe it's time for some milk and cookies and a nice nap.

Oh yeah, we will have to tear down a bunch of Trump statues but we are up to that task.

Billy showed up??? Big Spring Park is no Vegas.

Claire McCaskill has always figured out how to win is to always face the worst Republican opponent possible. She beat Al Hanson for State Auditor in 2002. Then she faced Jim "No"-Talent and got the Senate Seat in 2006.

Then on 2012 she got the Democrats to vote for Todd "Muh-Butt-Is" Akin in the primary so she wouldn't have to face Sarah Steelman. Todd run his mouth and was effectively dumped by the Republicans and she romped to win her second term on the general election.

She's Hillary Lite, but she is smart enough to try to pick her Republican opponent by meddling in the primary.

Austen Peterson told me that Claire McCaskill supports this corporate lawyer flunky Josh Hawley instead of a "libertarian Republican" who can beat her in the general election because he has no baggage. An Attorney General candidate running for U.S. Senate has a big disadvantage because he must fight for the rich and powerful under color of the State of Missouri and put the weak in prison. Jay Nixon was whupped going up against Kit Bond for that reason.

Andrew Wood is running as an independent against Judge Kevin Lee Selby, and got enough petition signatures to be on the general election ballot.

1040...innuendo, petulant prattle gives you a certain smell of a very bitter ego...relax

Jeeze, the Republicans nominate pond scum and wonder why they lose. Hell, we ain't going to drain the swamp, we are just going to fill it with gators.

Why would they be criticizing the "witch hunt"? They found "Witch Greitens". They keep finding witches and it will end with orange Broom Hilda in the White House going to prison. At some point "Natural Selection" will thin this herd. "Hey, Jim Bob Billy Joe Johnny Ray! Hold my beer and watch this!"

Of course they are after Nicole Galloway because she is above reproach and does a great job of ferreting out corruption in the ranks. How anyone could not vote for here is beyond me and I am suspect of anyone saying negative remarks about her. She is probably the only good honest person in Jeff City. Her and her staff have got to be proud of what they do and have done for the state. As to this meeting it makes me want to puke with someone saying they wanted to hit McCaskill in the kisser. That person should have been escorted out and reprimanded for this kind of talk.

So if being awful and inept is grounds for being gone then Trump should be GONE!

Galloway has never run for an office, ever—- always appointed by Jay Nixon. Well now she has to stand for re-election, and there is a great Republican Field that’s goung to kill her!

McCaskill has been dead woman walking for a couple of years now. She can get a job on Morning Joe’s Little cable garbage show.

Let's see how the election plays out first before making your prognostications there Harvey. You were a Greitens backer too. We know how that ended. Maybe you can go to work for your garbage dump "Faux and Friends". They push all kinds of conspiracy crap. Just the type of meals you eat right up. By the way, you still can't spell check? I certainly hope that the "great republican field that's "goung" to kill her" is smarter than what you show. Poor thing gets so excited he can't type. Slow down there Harvey.

When that drug failed a clinical trial in Australia, the company’s stock plummeted. Collins is accused of telling his son about the disappointing results ahead of the public announcement, leading his son, his son’s father-in-law, and others to unload stocks before the drop. They avoided losing $768,000, according to the indictment.

For years, Collins’ relationship to Innate raised concerns in the Capitol."

At least six Republicans appear to have been convinced by Collins’ pitch (though at various times they claimed to have arrived at the stock purchase through media reports).

They were:
...
6. Rep. Billy Long (R-MO) reportedly became far more active in the stock market in 2015. Long sat on the House Energy and Commerce Committee, which addresses health policy.

Not even beginning to think that the fatcat vegas lovin' auctioneer from SWMo has done anything wrong...but it's on the internet and people will be talking!

Did Billy grab a falling knife?

The holdings from Long, Mullin and Collins make three GOP members of the Health subcommittee that have owned and/or sold Innate stock within the past two years.