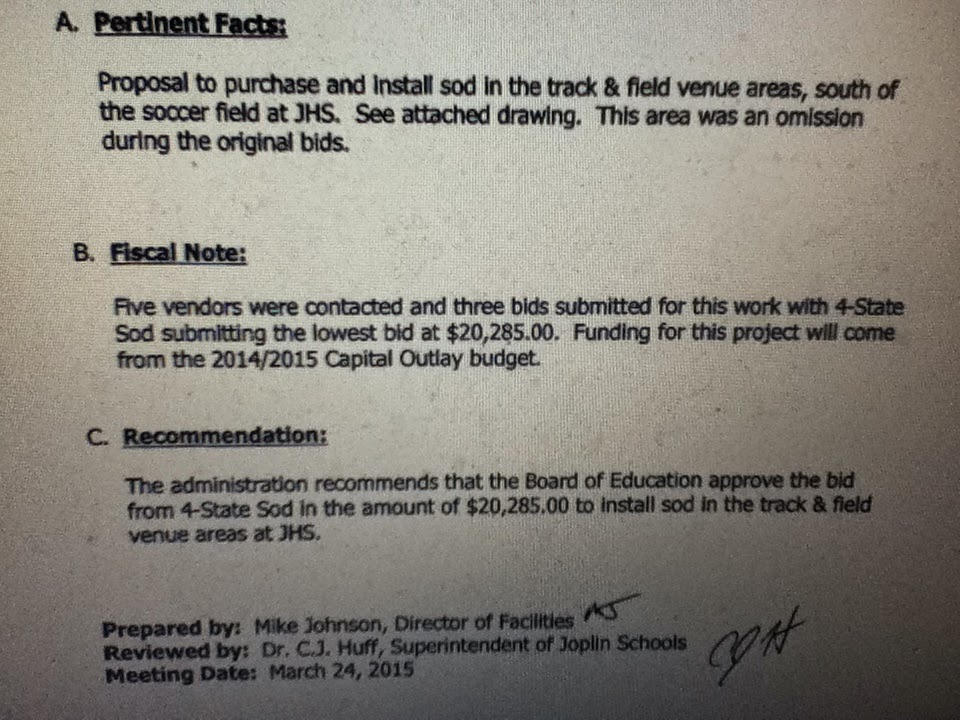 When C. J. Huff, Mike Johnson, and the Joplin R-8 administrative team were putting together their eight million dollars of "might-as-well" spending, they included press boxes for high school practice fields, four extra tennis courts, artificial turf for all fields, lighting for all fields, and a track.

Judging from the agenda for the 7 p.m. Tuesday, March 24, meeting of the R-8 Board of Education, the spending on the "might-as-well" items is not over.

In two items that are placed on the consent agenda, meaning they are not scheduled to be discussed by the board, Huff and Johnson recommend spending more than $35,000 for more improvements to the high school athletic facilities.

More than half of that, $20,255, is to install sod in the track and field areas because "this area was an omission during the original bids."

The rest of the money, $15,495, is to install "wave panels' in the practice field press boxes to improve the acoustics.

The money for the items will come out of the 2014/2015 capital outlay budget, according to the board documents.

The athletics expenditures are not only the big ticket items scheduled to come before the board. During the superintendent's report, Huff will talk about trading in the laptops that were purchased for Joplin High School students with money provided by the United Arab Emirates and matching donors.

Reportedly, the computers are being traded in for the more expensive Mac Air laptops. No documentation for what is referred to as a "laptop exchange" is included in the board's packet.

A few interesting items were included among the bills being presented for the board to pay:

-$8,445 for the Core Collaborative. This is professional Common Core training and is a monthly payment for training in something which may or may not be used depending on what happens with Common Core. The cost for the whole year is approximately $100,000

-$309.71 to the Rib Crib for lunch for the construction crew which is preparing administration offices at the Memorial Middle School building

-$12,095.61 to Embassy Embroidery, Webb City, for Joplin Eagles tumblers for the employees as "incentives"

-$119.97 for space heaters for the brand new Irving Elementary School

-$1,875.60 to Peregrine Corporation for power banks, listed as "Christmas gifts" to staff (the staff who received them must have been pretty far up the ladder)

-$123.17 to My Subs for lunch for the Board of Education's special meeting on February 9,  Ironically, this was the closed session in which the board listened dutifully as Huff read the responses he and his upper level staff had written for the board to give to state auditors to include in a final audit that was highly critical of the board's spending. The meal probably took longer than the review.

-$288.74 to Rib Crib for a meal for the Facilities Committee

Why would you need press boxes at a PRACTICE FIELD?

$1,875.60 to Peregrine Corporation for power banks, listed as "Christmas gifts" to staff (the staff who received them must have been pretty far up the ladder)


More cheap trinkets to throw to the masses.

Hey Randy, could you include a print button on your posts so I can easily print them to give my family that doesn't have internet?

They should funnel some of this "might as well spending" to the arts. Some of their equipment is in awful condition and needs fixing or replacing. I know for a fact that nearly all of the band instruments have never been cleaned based on what my son tells me.

10:59 - You know you can print directly from your web browser, right?:

No surprise that they have to fix the new construction. And no surprise that Huff wants to “might as well spend more money” on the over the top athletic complex. Considering that Joplin has two Athletic Directors and they’re now full time (12 month) positions with paid vacation days. The building principal is only 11 month and he’s responsible for the entire school including academics and athletics! The extravagant athletic facilities at JHS are going to help graduates be college and career ready, how?

Once again, a fortune has been spent on a relatively small percentage of students. My child does not participate in athletics at JHS. If you watch, it's practically the same kids all year around. So they have spent a fortune for a handful (400 or so?) of kids. Same way with the arts. That fine arts wing will be tremendous, and it's good to keep the arts in school, but once again, how may kids is that? I would guess about the same number. I wish all of those students well in their endeavors, and I hope they all appreciate the great cost that went into providing those facilities.

But what about the academic side? That impacts every student. I wanted books for my child, but I can bet he won't get them. They will claim they don't have the money for texts, or that they are not necessary. I beg to differ. I had children in that school before all of Dr. Huff's magic show of innovative education began. My older children had better teachers, better success, and a happier experience. Some things are just inherently needed, and Dr. Huff seems to have missed the obvious.

I will be voting for Koch, Martucci, and Roberts. I want common sense returned all across the board, not just with spending. This nonsense must be stopped, and voting against Huff is the only way I see that happening. It's time to restore sanity and learning in our schools. It might not get much attention at first, but academic success will eventually bring the media to your door. Look back where you were eight years ago, when that high school was noted nationally for its improvement. What were you doing then? Go back and do that again. We will support you all the way.

Oh yes Dr. Huff, we don't want the practice field press boxes to stick out like a sore thumb! The siding must match the high school's ugly siding to blend and fit the architects vision! A lot of money could have been saved by not adding the press boxes or the fancy practice fields and athletic complex. (I guess they had to have an attractive view from the "Corporate Suite".) They think that they might as well spend our money and put the district in deeper debt. What a great legacy to leave for the kids.